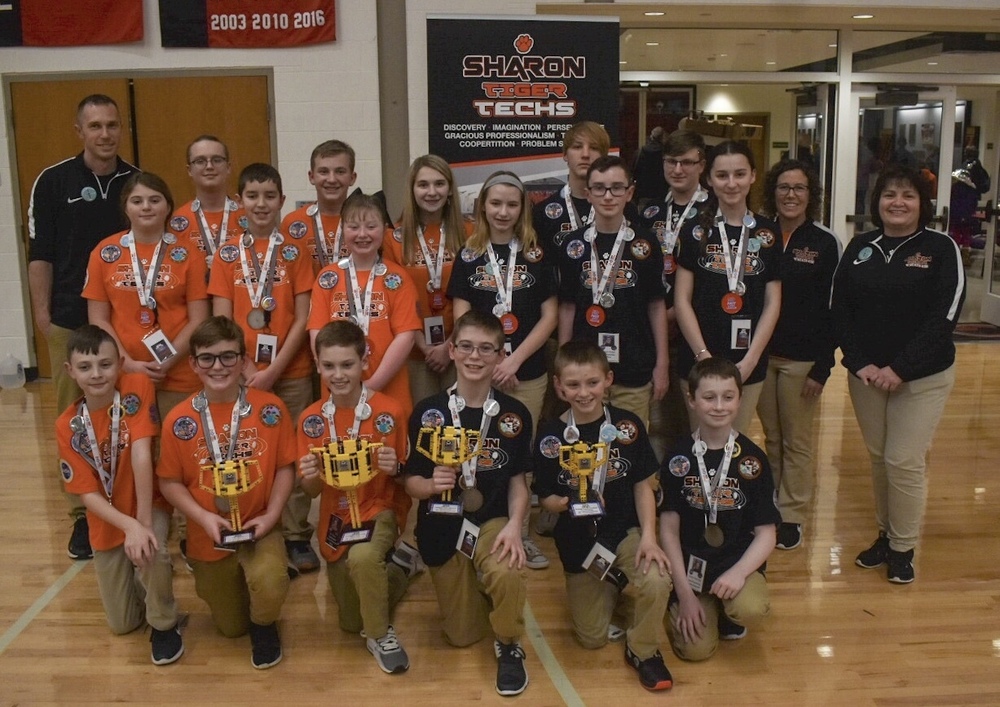 Two Sharon Robotics Teams are advancing to the world stage after placing first and second at the Western Pennsylvania FIRST LEGO League Championship.  The championship tournament, held December 7-8, 2018 at Sewickley Academy, included 80+ teams from the Pittsburgh region. The Sharon teams, Tiger Techs Team Orange and Tiger Techs Team Black, are made up of 4th-9thgrade students in the Sharon City School District.

While at the Pittsburgh championship, Tiger Techs Team Orange received the First Place Champions Award, advancing them to World Festival in Detroit, to be held in April 2019.  The Techs will compete with 107 of the top teams from around the world.  In addition, Team Orange received the Global Innovation Award for a research project solution to space travel.  The award allows them to research and develop their project further with possible advancement to the national level.  In addition to Team Orange placing, Tiger Techs Team Black placed second in robot performance and received the Second Place Champions Award, advancing them to an international open invitational event being held in May.

The theme for this year’s robotics challenge, “Into Orbit” centered on space travel and is universal in all three components of the competition: robotics, research, and core values. In robotics, the team completed 13 out of the 15 missions during two and a half minutes of game time.   The missions included tasks such as launching a space vehicle, retrieving an astronaut, and placing satellites into orbit using an EV3 Mindstorm Robot.

In research, the Tiger Techs had the goal to improve space travel.  To assist in their research, the Techs traveled to NASA’s Jet Propulsion Laboratory in May, NASA’s Glenn Research Center in July, and NASA’s Goddard Space Flight Center in September to learn more about space travel. In addition, they spoke to several experts in the space field, including the opportunity to meet astronauts Mike Fincke and Dr. Jerome Apt.    For their project development, the teams also relied on several local experts such as Open Arc Virtual Reality; several doctors; Marie McBride, a doctoral student at Purdue and former NASA intern; and Bob Sovesky of K & L Gates of Pittsburgh.

Finally, the Tiger Techs were judged according to how they display the FLL Core Values. The Core Values focus on teamwork; Gracious Professionalism; and Coopertition, the ability to cooperate and compete in a professional manner. The Tiger Techs have demonstrated their passion for robotics through participating in 15 outreach events that impacted over 2,500 individuals with robots.  The Techs have actively helped 30+ teams from around the world.

The robotics teams are part of the FIRST Lego League organization. FIRST stands for “For Inspiration and Recognition of Science and Technology.” They are under the leadership of Dave Tomko, Kelly Roys, and Darcy Wiesen.  The teams are funded by community sponsors from the Shenango Valley and the Sharon City School District.

Learn more about the Tiger Techs by checking out their website at:  www.tigertechsrobotics.com